My friends and I all LOVE antique quilts, and I especially enjoy the 18th century red and green applique. Miss Polly brought an extra copy for me from her trip to Houston (probably so I would not drool on her copy). Thank you Miss Polly, my friend!

And now this book is available on amazon for sale. So I thought I would share the news with all my friends. Here are a few sneak peeks, and a quick synopsis of the book below. 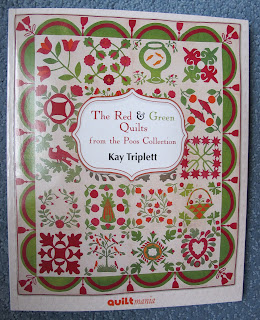 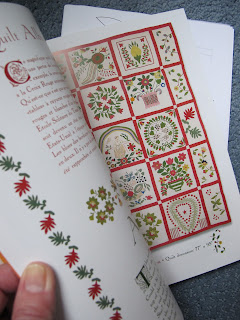 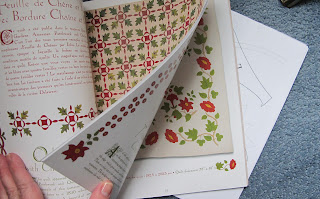 Gathered for a European exhibit in 2008 from a private collection, thirty-one antique red and green appliqué quilts are shown in glorious color with full page photos. The quilts in this exhibit were made in the United States in the mid-1800s or earlier, and chosen for their beauty of design, color, and quality of workmanship. The skill and incredible time commitment required to stitch these quilts indicate that they were made to be loved by future generations, not for everyday use.
Some are classic, and some are unique. Some are quirky – who would expect to find a goldfish bowl, complete with fish, on a Baltimore Album quilt? Some have obvious “mistakes.” All of them are fabulous!
The collector writes about the regional differences of styles and designs, and technical background of the fabrics and techniques used on these quilts. Text and descriptions of each quilt are written in French and repeated in English. The author, Kay Triplett, also offers -- from her own wonderful quilt collection --  photos and instructions for five appliqué quilts and a separate pattern foldout.
Now stop drooling on my blog -- go buy it and Enjoy!
The Red and Green Quilts from the Poos Collection, by Kay Triplett
Posted by Barbara at 6:29 AM 7 comments:

My friend Ady is planning her own Baltimore Garden Quilt. She plans to use her backbasting method, and she is not sure she has enough of the same green fabric that is "perfect for it." Not to worry! My fabric measurements in the book were generous. "Better to have too much than too little," I always say.

However, regarding "perfect for it" -- remember that in the 1840s, quilters "made do."  The quilter (or quilters) who made this antique quilt used several fabrics! You might not notice because they are the same color, but there are different prints. The variety of dyes and dying techniques were much more limited than today. In the book, Baltimore Garden Quilt, compare the green fabrics on pages 6 and 77 and the yellows on page 3 and 77.

Today I had some time to play, and photographed some closeups for you all. Keep in mind this quilt is 164 years old. The greens have held their color well; the yellows, not so much, and the Turkey reds are disintegrating, some gone to almost pink.   I think it makes any quilt, old or new, much more interesting to vary the fabrics! Don't you?


Thanks Ady, for a great question! 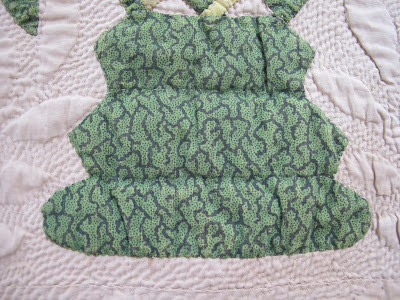 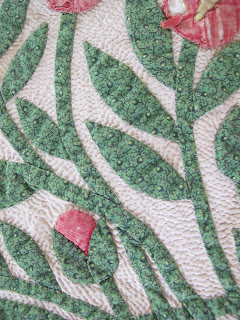 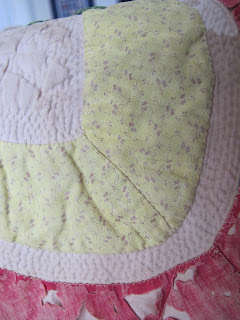 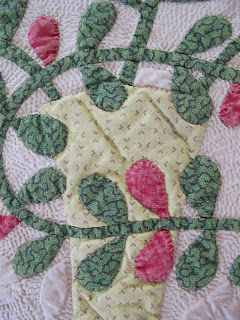 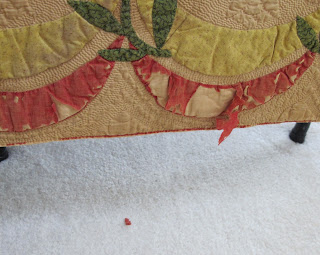 The last photo shows what happens every time I bring the old girl out to play. :-(

We have to remember, she is 164 years old, and very fragile.

Freezer Paper - None goes to waste!

I love freezer paper. It is useful for SO many things in quilting!
Here is another great use for freezer paper, even those little scraps you might toss in the trash.
Write notes to yourself (or others) and press the note to a fabric instead of tape, sticky office dots, staples, or pins, which may damage fabric, especially pins that might stick you someday!Even safety pins can rust and leave holes in the fabric.

For example:
"Save for binding on Mary's quilt."
"Save this piece of backing for sleeve."
"Has been washed."
"108-inch Wide Backing - washed and pressed"
"9.5 yards" - Cross through that amount when you cut off a piece, and write the new amount.
Numbers or letters that are keys to your pattern, a piecing order, or a quilt layout idea.
I have one fabric with a freezer paper note that says "This red fabric bleeds!" 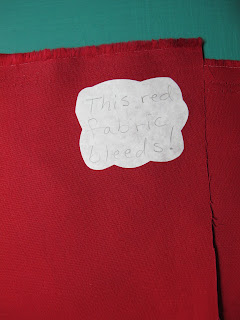 How about this one: "Free to Good Home."

Save information from selvages when they are cut off. You might want to have that information later. Write it on freezer paper, and press it to a corner.

Maybe your guild has a sale or flea market. Roll a fabric piece, write the price or yardage on a strip of freezer paper. Wrap the freezer paper strip around the roll, and press the strip to itself at the end.

I bet you can think of other things you might want to note on your fabrics ...

Here's a great idea for storing and travelling with your applique. You will need:
Cut the batting straight on one edge with a rotary cutter, to place at the center of the folder. If you have leftover strips of batting, cut into sections enough to cover one entire side of the inside of the folder. I enjoy using the pinking cutter - it seems to make the sections fit together nicely with those pinked edges.

Rub gluestick inside the folder, carefully lay the batting on the glue, close the folder and press flat. Let it dry, and trim off excess from the top and bottom. 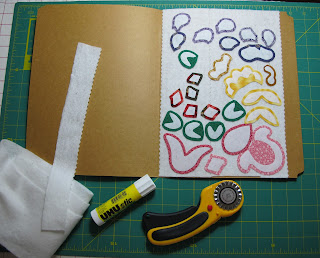 Now you have a handy place to store and carry your applique pieces until needed. They stay flat, clean, and easy to find. The batting holds them in place! 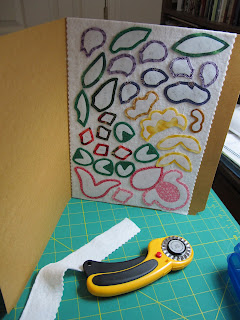 Make a folder for each project!

Seldom, if ever, do I purchase a complete "quilt kit" where all the fabric is offered with the pattern and instructions. However, this design by Lori Smith appealed to me, one of her Fit to Frame series. The fabrics in the package were charming, especially the background printed with subtle handwriting, which, although you can read some of the words, they don't really make sentences. It made a nice small project, handy for traveling. Oh, and there are birds, of course!

On a road trip to Florida, I decided to hand quilt this little project. I've always wanted to try echo quilting, so I used a snippet of 1/4-inch tape on my thumbnail to 'guesstimate' distances -- a trick shared by Virginia Siciliano. It was a lot of fun! I would do this style of hand quilting again. 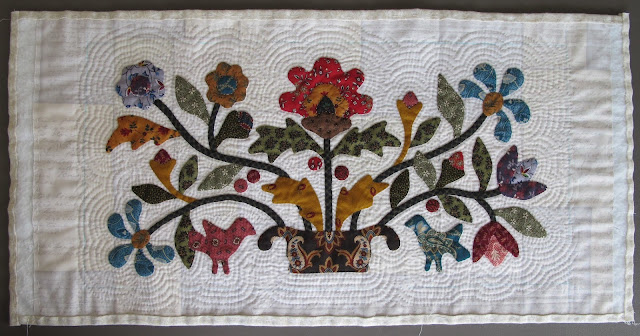 However, in the end, as I prepared to trim the edges for binding, it suddenly occurred to me that all that precious little handwriting in the background fabric disappeared! Oh, I suppose I could take all that quilting out and start over -- NOT. 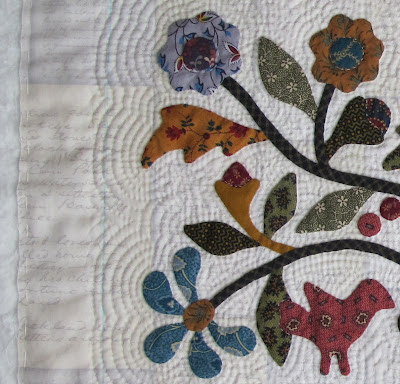 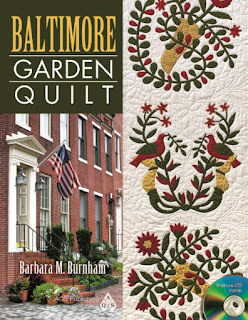 WHO:  Barbara M. Burnham
will be signing books
plus


TECHNIQUE DEMONSTRATIONS
from the book


SPECIAL EXHIBITS
"M.E.C. 1848" the antique quilt that inspired the book, will be displayed.

Rarely displayed because it is very fragile - each handling results in more fabric loss.
FINISHED QUILTS, TOPS, AND BLOCKS made with patterns from the book in new colorways

Currently displayed in the shop is Barbara's quilt "Blue Bird Basket" quilt. Stop by, or call and sign up for the class starting May 5. Class description and schedule here: Seminole Sampler SPRING 2012 Classes

If you plan to attend the American Quilter's Society 2012 Quilt Show and Competition in Paducah, KY, April 25-28, 2012, be sure to stop by Author's Row to see the new reproduction quilt, "M.E.C. Remembered," featured in the book Baltimore Garden Quilt.

Also at Paducah, entered in the competition, is "Pride of Baltimore II," another Baltimore Album Quilt made by Barbara M. Burnham and beautifully quilted by Marty Vint.
Posted by Barbara at 12:51 PM No comments:

Cynthia in Texas is stitching her version of Baltimore Garden Quilt. She plans to make nine blocks, and will use the quilt-as-you-go method for hand quilting it. Of course, she will include the broderie perse technique for which she is so admired.

Cynthia has graciously agreed to share her first block here for all of us to enjoy and be inspired! This is Cynthia's version of Block A3, Amelia's Rose Garden. The flowers were strategically cut from a beautiful fabric, and then arranged on the block for applique. 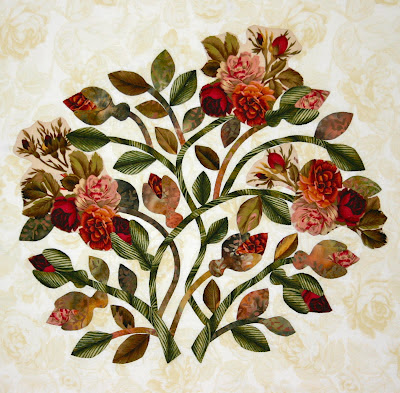 Now Cynthia is working on the birds in the cherry tree, Block B1. I can't wait to see what she does with those birds!

Lately, I've been stitching a new version of the cherry tree block too - and it's pretty wild! I hope to post soon about stitching the birds' eyes, comparing the antique birds' eyes with options for today's applique.

Barbara
Posted by Barbara at 8:58 AM 5 comments:

My friend Deb Cooney sent me this info. to share with you all about the current exhibit at the DAR Museum in Washington DC.  Thanks Deb!

Be sure to plan a visit to the Washington, DC, area this summer (2012). Take this rare opportunity to see eight of its best album quilts, which are on exhibit through September 1, 2012. In addition, two of the museum's most quirky and appealing quilts are part of the current exhibition "By, For, and Of the People:  Folk Art and Americana."

The DAR Museum will be closed June 24-30 for a conference and July 4; otherwise it is open daily except Sunday and the gallery is free of charge.  Here is the DAR Museum news for this exhibit:
http://www.dar.org/museum/musnews.cfm

If you visit you will see: 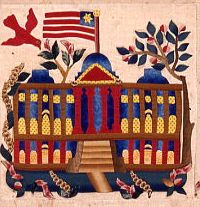 The DAR's wonderful Baltimore Album Quilt Top, (often known as the "Mary Simon Quilt Top") which appears to be samples of various blocks for sale by their designer.  This top, dated 1846, is among the most elaborate and complex examples of Baltimore's masterpiece albums. The pattern is still available.
http://www.quiltindex.org/basicdisplay.php?kid=46-7A-7B

The Jackson Baltimore Album Quilt of around 1850 honors Andrew Jackson's victory at the Battle of New Orleans in 1815 with heavily stuffed floral tributes.
http://www.quiltindex.org/fulldisplay.php?kid=46-7A-C8

The Sheetz Family Rose Wreath Quilt was made around 1860 by a member of the same family of the Jackson album.
http://www.quiltindex.org/basicdisplay.php?kid=46-7A-57

This  combination of spiky arms & bursting wreaths in The Waring Quilt was made in 1851 for Thomas H. Arnold, for whom Arnold, Maryland, was named.
http://www.quiltindex.org/basicdisplay.php?kid=46-7A-94

Cornelia Everhart Wissler did this charming interpretation of Mary Simon designs in 1857, shortly before her marriage, called the "Wissler Family Quilt."
http://www.quiltindex.org/basicdisplay.php?kid=46-7A-119

The Penn Family Album Quilt sports a bevy of ruched flowers in its vases and wreaths and a quirky backwards quilted inscription.
http://www.quiltindex.org/basicdisplay.php?kid=46-7A-F1

"The Blackbirds Quilt" or "Birds of a Feather" made by Blanche R. Parker around 1940 in Tennessee, uses just a few pieces of cloth to make flight look easy.
http://www.quiltindex.org/basicdisplay.php?kid=46-7A-B4

Many more folk art objects are in this exhibit, the DAR Museum’s first-ever exhibition devoted entirely to folk art.
Posted by Barbara at 12:56 PM 7 comments:

Marty Vint will be joining us! She is the brave lady who quilted my quilt "M.E.C. Remembered" in the book Baltimore Garden Quilt. She started with my hand drawings of quilting designs that I traced from the antique quilt, and she stitched all those designs with her Gammill longarm, plus quilted around all the applique pieces - quite a project! She did such a beautiful job! The quilt won a 2nd place ribbon at the 2010 American Quilter's Society show in Paducah for Bed Quilts - Longarm/ Midarm Machine Quilted.

We will sign books, do some demos, and bring some quilts to display, including the original 1848 antique quilt that inspired the book.  I do not bring this quilt out to visit often, because it is very fragile - each visit results in more fabric loss.

The reproduction quilt, "M.E.C. Remembered" is currently in Paducah, to be exhibited on Author's Row at the AQS 2012 quilt show April, 25-28, 2012. However, you might want to take this opportunity to see the antique quilt, up close and personal.

Hope you will join us! More information at Pawprints:  http://www.bearspawfabrics.com

More book signings coming soon ...
Posted by Barbara at 8:08 AM No comments: