Cynthia in Texas has been busy stitching her Baltimore Garden Quilt blocks with a beautiful twist. She is adding a broderie perse technique, cutting motifs such as flowers and birds from various fabrics. Cynthia is a master at finding just the right fabrics, and using them to their best advantage.

We have seen Cynthia's Block B1 in a previous post, and I've been anxious to share more of her blocks. Now she has finished several more blocks, and here they are (with Cynthia's permission, of course). This one, a floral block with trios of roses in pinks, reds, and burnt orange. Check out these bursting rosebuds, with just a bit of the rose motif in the calyx, and added sets of newly formed rosebuds. 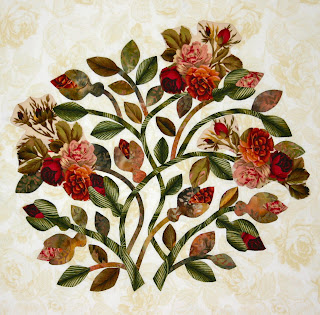 Then, Cynthia completed a wreath with four open blooms - not sure what the flower is called, but it sure is appropriate for this lovely wreath. Next, a sprouting garden of pinks and iris, and a wreath of old fashioned roses. Several leaves are also carefully cut from her focus fabric. 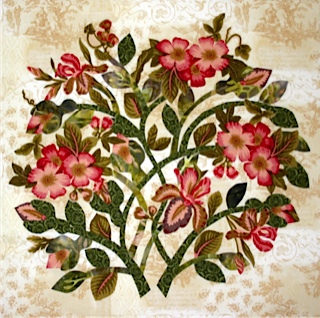 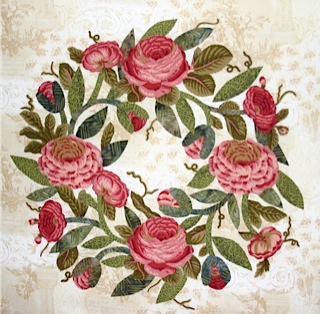 Here is Cynthia's version of a Woven Basket. Are you noticing all the little tendrils? There are even some tiny morning glory buds to promise more blooms for tomorrow. 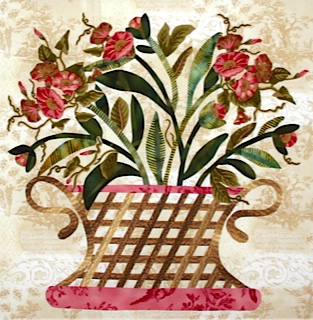 And a coordinated vase of full-blown roses, of course, complete with their buds and leaflets. 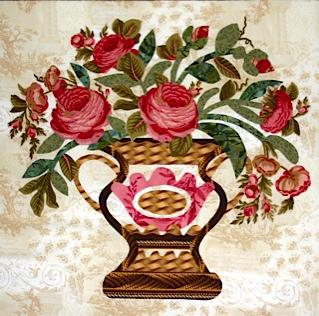 Perfect for a four-block set! 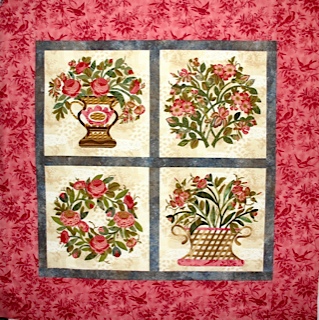 Cynthia continues on, (there is no stopping her!) to make the same Vase block again, this time, featuring a cutout of a maiden pouring water from a jug. Quite an inspiration for creative use of printed fabrics, don't you think? (And look closely - there are TWO birds in there!) 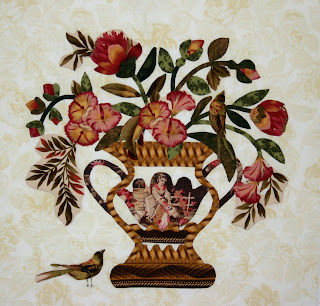 Note From Cynthia:  The floral fabric is Love Letters by Laundry Basket for Moda. The toile border (and a bit on the baskets) is Garden of Enchantment by Maywood Studio. The background toile is Reflections by Ro Gregg for Paintbrush Studio. ﻿
Posted by Barbara at 6:17 AM 8 comments:

The search for just the right fabric continues!

Quilters have sent me questions and suggestions about fabric choices for their Baltimore Garden Quilts, and other 1850s reproduction red and green quilts. As fabrics go out of print and new ones become available, I will try to post more suggestions. Several stitchers are doing blocks with broderie perse fabrics. Those I will list in another post very soon, with lots of photos!

Here are some fabric lines suggested by friends, and shop owners, and some that I have used. The first ones listed may be available now, or have been out for a year or two. Later in my list are newer lines coming soon.

Turkey Red – There are a lot of nice Turkey red solids and subtle prints available all the time. However, I would NOT recommend Kona – it is too thick and heavy for fine appliqué and especially too thick for multilayer flowers.

Here is a red fabric that I have really enjoyed using for multilayer flowers, Robert Kaufman "Fusions" Screen Print D# 5573 (pictured below). This multilayer flower is from the Block B3 pattern; the most complex layered flower in the book, Baltimore Garden Quilt. See how the subtle shading makes it look like each petal was stitched on separately?


For greens and yellows, the following choices are wonderful, if you can still find them:

COMING SOON, OR LATER THIS YEAR

A friend who recently attended Quilt Market posted an update of future fabric ranges on her blog. Here are some you might want to consider for your Baltimore Garden Quilt.
Here is a fabric line I am really looking forward to! PERFECT yellows, PERFECT greens, and one potential Turkey red print (available 11-20-2012):

The next two collections will be popular for Baltimore Album quilts – definitely also on my list:

Here is another find (thank you Charmaine!) from Andover Fabrics - IQSC Square in a Square (available September 2012)
http://www.andoverfabrics.com/Grid.php?GroupName=IQSC Square in Square 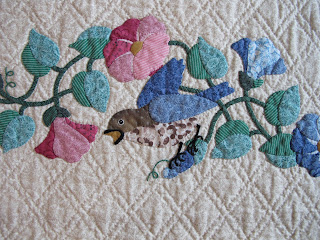 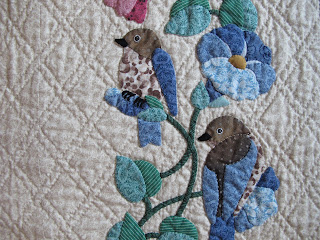 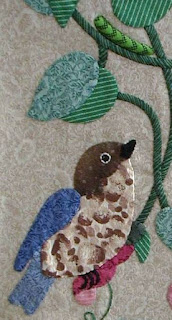